The image of a dog carrying a cat, walking in all directions together, melts millions of hearts

Henry and Baloo have a lot in common: they’re both rescued, and enjoy hiking in places with great scenery, and a huge fan following on social media.

Photos taken of a trip of a dog and cat couple in the mountains of Colorado, USA, attract hundreds of thousands of followers on the photo-sharing platform Instagram.

Even Henry and Baloo’s owners, Cynthia Bennett and Andre Sibilsky, don’t want to believe the fame of the two four-legged family members. 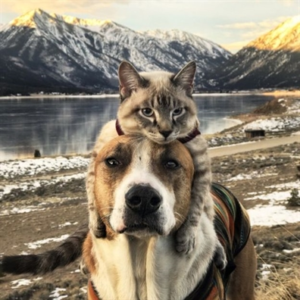 Cynthia and Andre met in Boston, but because of their backgrounds in New Hampshire and Texas, the couple both love nature and don’t like being tied down in city life.

The two started hiking regularly and as they settled down, they decided to expand their family by adopting a dog.

The special set of photos was taken during Henry and Baloo’s travels in the mountains of Colorado, USA. Since the beginning of the year, a series of lovely moments of this couple has started to attract everyone’s attention. 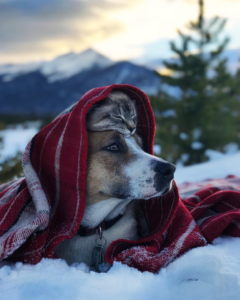 The image of the cat Baloo always lying on the back of the dog Henry with his eyes half asleep makes viewers “melt”. “Look at how cute they are!”, “You two are so happy and sweet together”… are comments from netizens under the pictures.

Cynthia and her husband are animal lovers who love to travel. Henry was adopted by both of them after they moved to Boston, USA. On all excursions, the couple brought a “four-legged friend”. 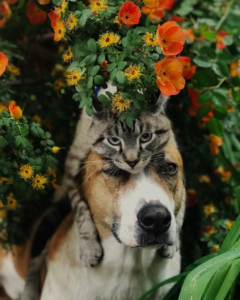 Like Henry, Baloo was abandoned as soon as he was born and was raised by the rescue camp. According to Cynthia, this strange dog-cat friendship may have stemmed from “silly but cute” misunderstandings. “I think Baloo thought Henry was his mother. For the first few months, Baloo was just attached to the dog. Henry also seemed to mistake Baloo for a dog like him, because he didn’t like to play with other cats before.” she explained.

While Henry is very strong and active, Baloo is quite inactive, somewhat dependent on his friend. Although this connection is difficult to explain, the friendship between Henry and Baloo has remained strong over time.

Through the newly updated images, the popularity and interest of the online community does not seem to have much impact on life, especially the friendship of Henry – Baloo. The two still carry each other for a walk along the riverbanks, sleep together or simply watch the sunset.